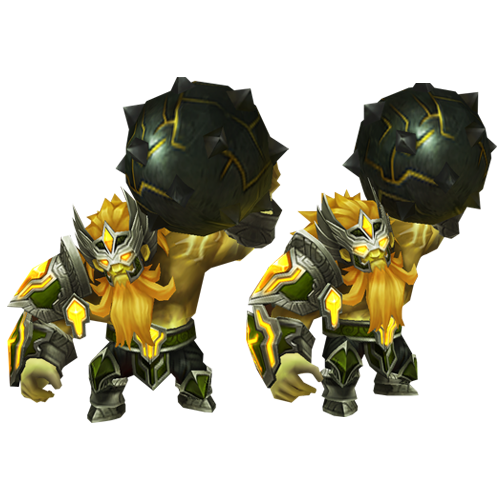 Increases the Defense of ally monsters by 22%. (In All Content)

Attacks the enemy and reduces the Attack Bar by 30% with a 50% chance.

Throws the weapon up in the sky and shares damage with all enemies by the amount of your MAX HP on your next turn. This attack can't be counterattacked. (Reusable in 6 turns)

You can't counterattack or attack together with other allies while the weapon is not in your hand, but your Defense will be increased by 50%. Also decreases the cooldown time when you're attacked. [Automatic Effect]

Try to get Skogul close to 100% resistance with as much HP as you can and decent speed. You'll also want 15% accuracy if you want to use him in R5. 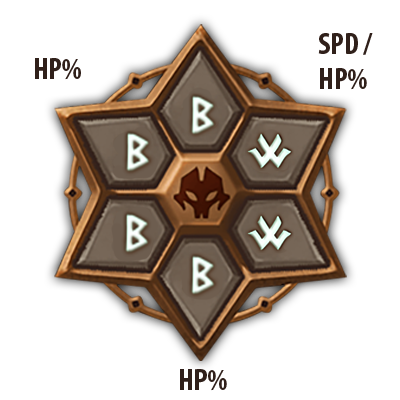 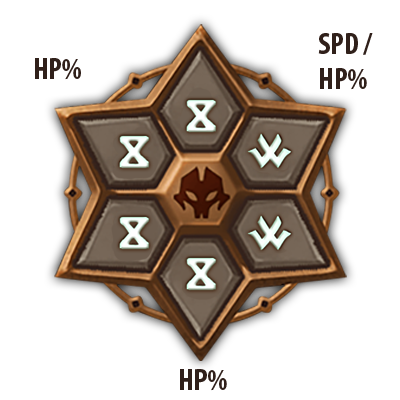 If you're looking for a more in-depth guide on how to build, rune, and use Skogul for different content in Summoners War, consider getting our Rune Farming Guide. There we cover exactly how much of each stat you will need and what other monsters to use on teams with Veromos.

GB10 (0/10): Skogul is not good in Giant's B10 because 66.6% of his rock damage is absorbed by the two towers instead of the boss. There are tons of better F2P options so don't use him here.

DB10 (0/10): Skogul is not good in Dragon's B10 because 66.6% of his rock damage is absorbed by the two towers instead of the boss. He also has element disadvantage, there are tons of better F2P options so don't use him here.

NB10 (0/10): Skogul is not good in Nerco B10 because he has no Multi-hits or important buffs/debuffs.

ToA (0/10): ToA monsters have tons of HP so Skoguls damage will not do much, he also doesn't provide and type of important crowd control. There are tons of better F2P options so don't use him here.

Rift of Worlds (7/10): While Skogul is pretty bad in all the Rift Beasts he is a great frontline tank that doubles as a damage dealer. His high HP combined with his passive that increases his Def he can easily tank the frontline especially if you build him on Vampire runes. His skill one also provides ATB push back and his skill two does a good amount of damage to the boss.

Dimensional Hole (7/10): Skogul is being used in a few good teams for KZ5 and EL5 (The Rune Dungeons).

Labyrinth (7/10): Skogul is a great option for certain Labyrinth stages.

Arena (6/10): He is pretty bad on arena defense because he gets killed easily by Lushens but a 2-3 Skogul offense with something like a Wossa to project them can work.

RTA (4/10): Skogul is not a great pick in RTA, his HP scaling gets nerfed after a few turns when HP gets reduced and ATK gets increased. The RTA meta also has a lot of units that can easily control Skogul to stop him from landing his Atlas Stone.

Overview: Skogul is one of the best natural 4-star monsters for Guild Wars and even has some usefulness in PvE content.

Is He Worth Using Summoning Stone For?:  Yes, many players use their summoning stones to get a Skogul or two but you should only do so if you already have the following Nat 4's: Lushen, Shaina, Sabrina, Hwa, Talia.

The Violent build is great for Guild Wars because Skogul can throw up the Atlas Stone and violent proc into it falling instantly, the Vampire build is also great because your opponent will be trying to kill your Skogul and when the stone lands it will heal him back up. Vampire is also the best set for a R5 Skogul so he can tank the frontline even if your healer dies.

For secondary sets Destroy is great for PvP because it means your opponent has to win before Skogul gets off a few Atlas Stones since they won't be able to heal back up the damage. Nemesis is also great because while your opponent is try to kill your Skogul before the stone lands they will be giving him Attack Bar which will make the stone land faster. If you can't get good stats with those sets just go for something like Energy or Endure to get his HP and Resistance higher.

How To Counter In PvP: Skogul is very hard to counter in Guild Wars that is why he is so good. The easiest way to counter him is with some kind of a Copper/Bulldozer team. You want to try and kill the Skogul before this Atlas Stone can land.

The only other way to counter him is either by bringing a high HP tanky team with good sustain but if the Skogul is on Destroy runes that could shut down your whole plan.

Trying to just lock him down with stuns doesn't work most of the time because he is normally paired with teammates that can cleanse and give him immunity.

How And Where To Use: Skogul should for sure be used on Defense and Offense for Guild Wars. Here are a few strong Guild War Defenses with Skogul:

Skogul is also a great frontline tank in R5 that can be used as a third damage dealer.